This lesson was very interesting for me because I did not prepare any worksheet for the lesson.  I had to use the student's book and there was a reading passage, exercises...  I used some of the exercises on the board.  It was a very enjoyable lesson.

Here is my lesson plan:

I taught vocabulary in my warm-up stage.  These words are in the text, so they became ready for the text.  I stuck them on the board after showing with my hand.  Each flashcard has a picture and a hidden name of it.  At the back of the card, Turkish translation was written. 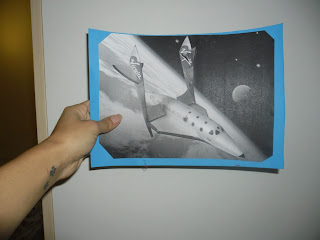 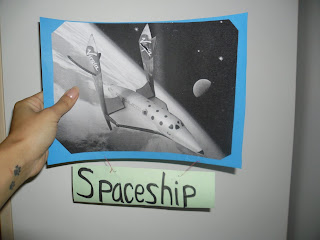 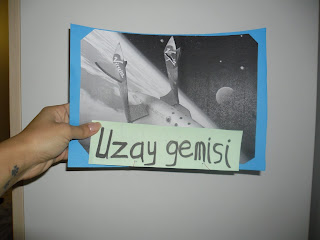 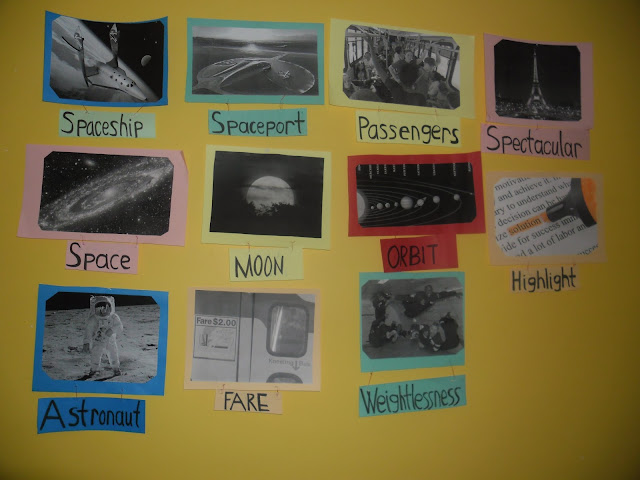 This is the copy of the book. The students scaned the text and found the words in it.  Then, They read the text and did exercises 3 which are comprehension questions of the text. 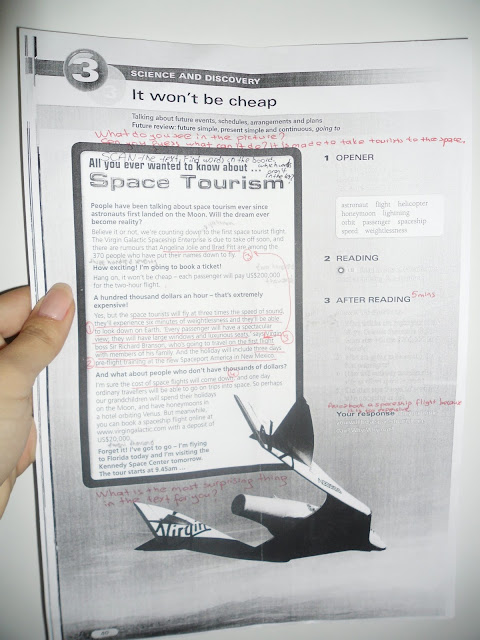 After the reading and comprehension questions,  I stuck prediction situations on the board.  It was written on the book and I told "will" is used for predictions, so they chose one situation and created sentences. This is the version of the book: 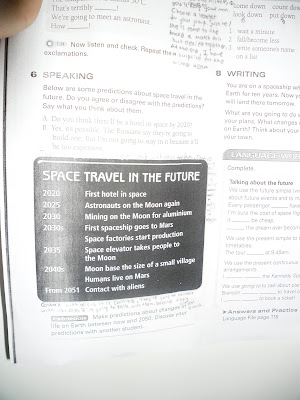 This is my version on the board : 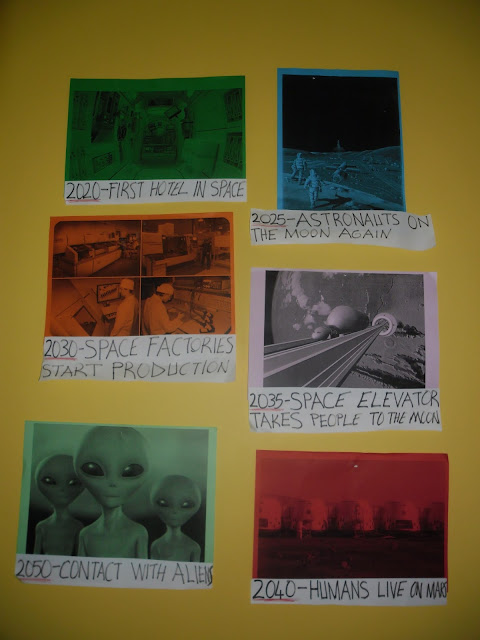 After eliciting the answers, I divided the students as groups and gave one phrasal verb to each group : 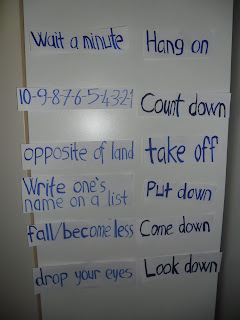 This is the reward for the winner teams : 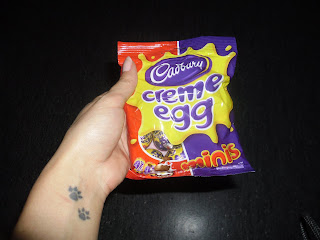 After finishing the lesson, one of my colleaque Özge taught the future tense and continuous and applied some activities in the second lesson.  This lesson was very enjoable, too. :)   Below, there is a story about one couple to show the students the difference of talking about the future. 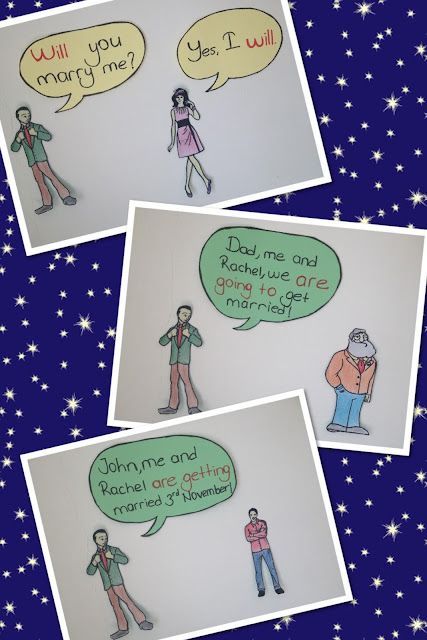 What is your favorite word ?

This is a both simple and difficult question because most people do not think of it. However, some people have already thought about this like below the video.


A language is alive like humans, animals and it can born and die.  A language can change because of many things, especially interaction with the other cultures and inventions. But which inventions?  I heard what have you thought now :)  Computer and internet. Nowadays, the word of "internet" seems very usual. However, it is a nice word and it means a lot. All words like internet have a history in it like humans.  The other popular word is "blog".  Bloggers, blogging, blog etc.. , many words are occuring with the help of the technology and these words can be someone's favorite words.  David Crystal, who is a linguist, is one of these people.  Let's hear his favorite words !

If you ask me , my favorite word is "write".  It seems usual, but the important thing is what you attribute a meaning to a word and what kind of value the word itself has in your life... :)  I love to write. "Write" is everywhere in my life and it is the most beautiful invention according to me. 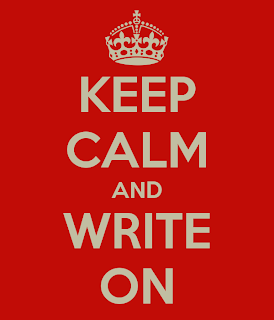 My study of Students’ Opinions about Blogs

The Blog started to become a popular tool on the internet. Generally, its reason is that blogs do not need any programming skills on the computer or on the internet. Therefore, blogs are used in so many areas. One of those areas is the education.  Especially language learning can be obtained via blogs. The aim of this study was to explore how blogs are seen by the students and effects of blogs on language skills such as reading, writing and listening and advantages and disadvantages of using blogs for language learners.

Learners read each others’ blogs and they learned something about their friends’ worlds. A friend’s blog could be considered as an authentic material so learners became more enthusiastic to read their blogs. Because of that these readings on the blogs were simple and shorter than other readings, learners liked reading blogs. In a study , a learner said that “ I think it’s the most beautiful tool of the world and it allows us the most magic thing…” ( Downes, 2004, p.14)

Writing on a blog was partially different from any writing assignment, because learners might not understand the assignment’s main content. However, learners had to have a purpose while writing to the blog and they thought there were other readers. This thought  made them aware of what they wrote (Ward, 2004, p.3)

The teacher might put some listening activities into his/her blog and students might go there. To illustrate, Banville (2010) suggested jigsaw listening and he used free audio editor and recorder Audacity. He made his own listening test to give it to his students.  If this activity had been put on his blog, students would go there to improve themselves in listening whenever they want.

A quantitative survey was used in this study. ten Turkish students, one male and nine females, ages 20- 40, were from several hometowns and in the second, third or fourth year of classes at the same college. Students used an individual blogger account and they commented on each other’s blogs in the semester for one of their courses.

They got enjoyed while writing on the blog and reading it :  60%

The students were visiting their blogs often: 80%
The students thought that they were aware of  benefits of blogs:  50%
Disagree with the power of the blog on the listening skill: 30%
The students had not used a blog for educational purposes until the course: 80%

The things the students like the best in blogging: 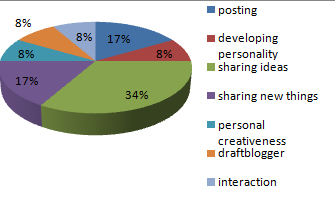 Also, in the questionnaire, the students commented on the other ways that a blog could be useful in their language development :

The most important advantage was encouraging them to write something. The second one was providing communication via blogs. The other advantages were to create a friendly environment, to be good for extrovert people who like to talk, to help connect to the world,  to share ideas, to get different ideas from people or articles, to develop an ability of self-expression of the students, to improve language learning skills, to be good for the participation of shy students, to get feedback for posts and to interact with the foreigners who speak the target language as a native.

According to 30% of participants:
They said : the blogs were not interesting for some people, they were boring, they included unnecessary information,   they needed ability of using computer programs, they took too much time of the students,  they could be terrible because of internet problems, they could be waste of time because using it is according to your position in your life and they could be dangerous in terms of privacy settings.

This study demonstrated that the language learners could mostly improve their writing, with the help of using blogs in lessons. Moreover, the survey supplied learners, who did not know what a blog was really and its benefits with costs, a general and meaningful view on blogs. If  the disadvantages of using blogs were cleared away, the students would get more benefits from the blog by writing on the blogs more and doing it intrinsically... 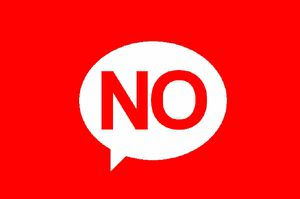 While learning another language, one may not understand or comprehend the given sentences alone.  To make clear these sentences to the learners and to establish a relationship between linguistic forms and people who use these forms are the research areas of pragmatics.  According to pragmatics, a language is perceived with the situations.  That is, pragmatics is related to speech acts.  Speech acts are the terms and actions such as apologies, suggestions, complaints, refusals etc…  Most language learners often use refusals in their daily lives.  However, when they rejected demands of others in the second language, learners may use their own communicative strategies as they used in their native language (Yamagashira, 2001, p. 259).
Focus of this study was to explore what strategies Turkish speakers and English speakers used for situations differently and similarly. 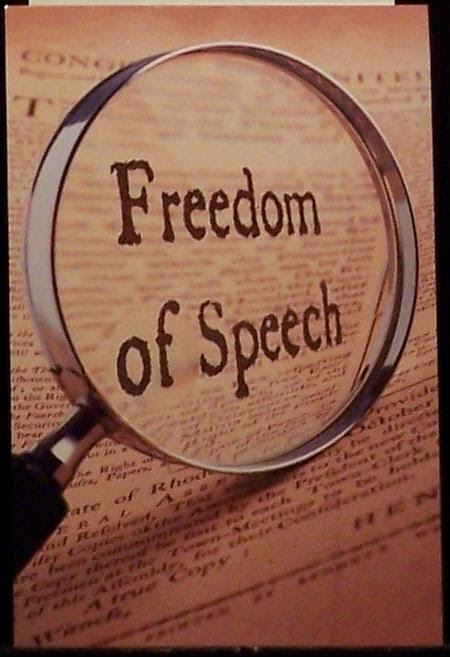 Findings showed that they gave similar refusals to the scenarios generally. Why they had so similar thoughts while refusing something can be that native speakers of English stayed in Cyprus more than two years. They interacted with Turkish people. The reason of differences can be their different status and their different ages because Turkish participants were students. That is, they could just imagine the situations. Maybe, They did not have these experiences. However, native speakers of English had some experiences due to their ages and their status.
Moreover, it was concluded that when the study was done with more participant, results became more satisfactory.  In this study, Turkish participants used more daily language while refusing in Turkish language.  However, when it came to English, they chose being formal to refuse the interlocutor.
Posted by Unknown at 07:49 No comments:

Counting and writing the numbers until nine in English- LESSON PLAN

In young learners lesson, I prepared a lesson plan for my final project.  You can see and comment my work. :)

Here are the background information about my students and the lesson.

Here is the lesson plan :

These are the appendix pages in my lesson plan:

And finally, this is my poster presentation of my lesson: 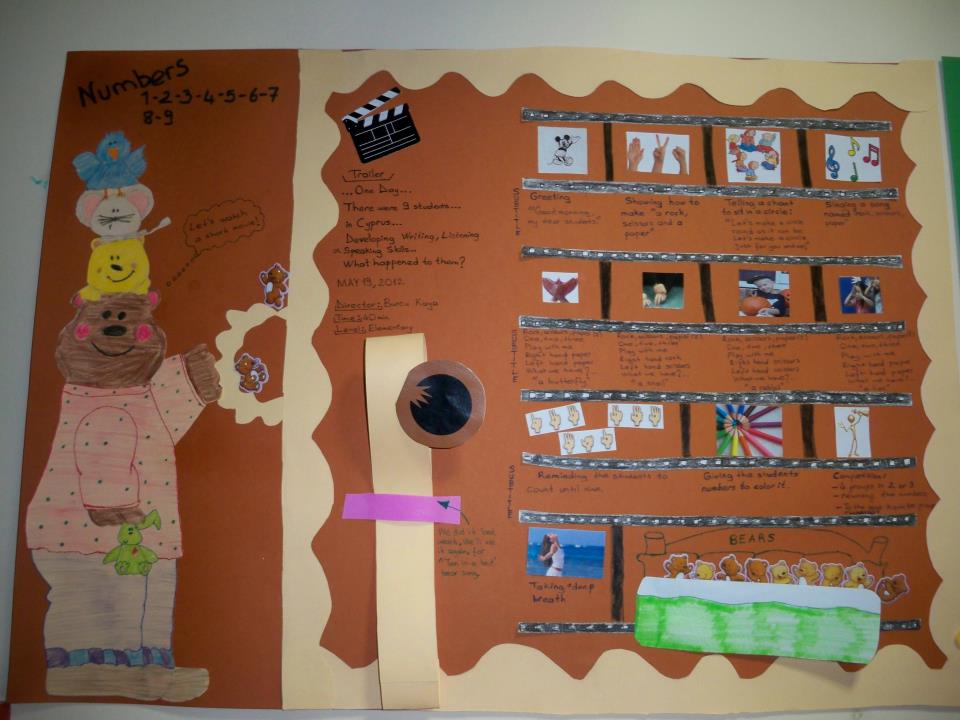 I had fun while preparing this lesson, I hope it becomes useful for you! :)


I applied this lesson plan to upper- intermediates as you see in my lesson plan.  However, some small problems occurred because the students were just 10 people in that day and my mentor teacher had told me that they would cover the reported speech until I came to teach there for my internship. But, it did not happen, they could not remember reported speech and I recognized it after ı gave them their first worksheet. Although these negative things which does not lie at my door, I believe my lesson plan worked well and my students enjoyed very well.  Below is my lesson plan and I will support it with my pictures.


I sticked a picture from "LOVE ACTUALLY" movie and I asked questions. 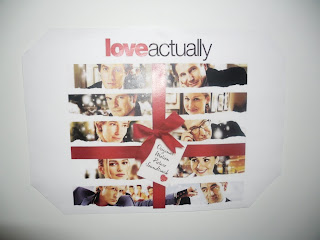 I gave them a worksheet about the movie. 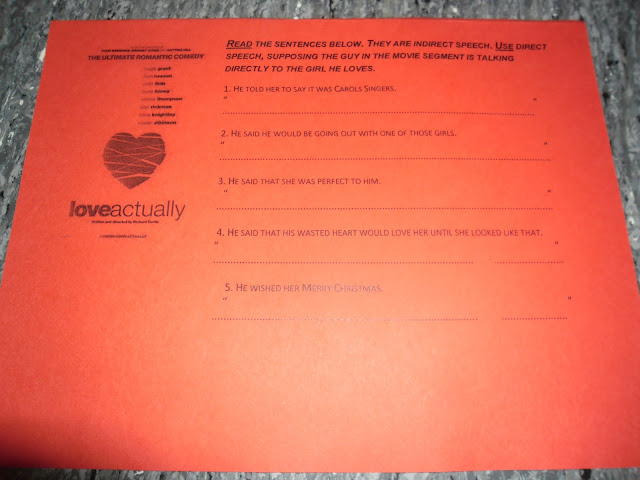 After they complete the sentences, they checked their answers from the movie by watching two times.

While I explaining reported speech, I said " we can use reported spech in our gossips.  Pardon, in these days people do not say they are gossiping, they say : We are just analyzing the situations and people.  So, we'll just analyze the situations and people, we don't gossip never ever."  Then, I told them I had invited three gossip girl characters. 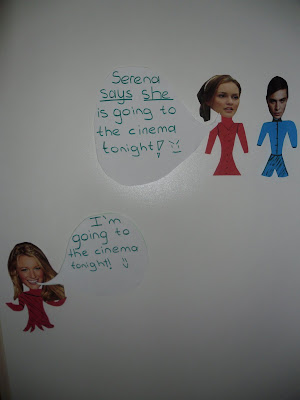 After I explained my topic superficially and told them the difference between "say" and "tell" , I gave them a classic worksheet for 10 minutes. 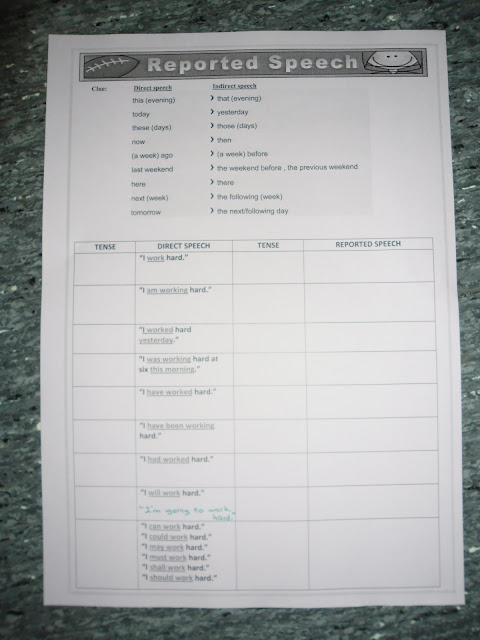 After eliciting the answers, the game started.  There are isolated students near the wall and their english is very poor.  Therefore, I did not want them to be in the same team for the game.  I divided the students into two groups by telling them in order "you are red, you are blue, you are red, you are blue..."  Red ones gathered in one corner, and blue ones gathered one group.  I gave them small papers to write and wanted them to select a writer.  I read direct sentences and they changed them to reported sentences as soon as possible.  They wrote their sentences on the papers and  showed me by raising them up. After each correct sentence, the group will go further until they scored a goal. 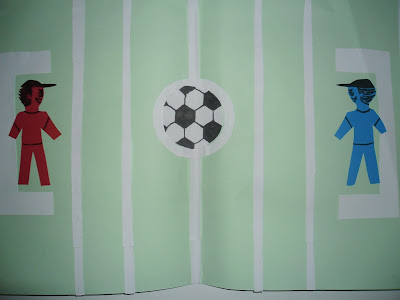 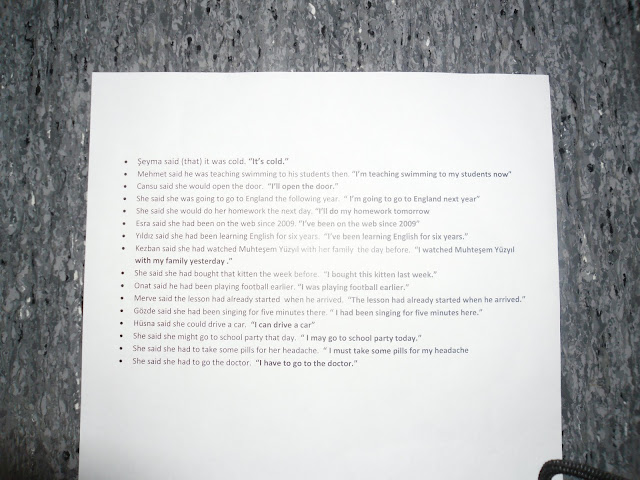 I gave a reward for the winner team. 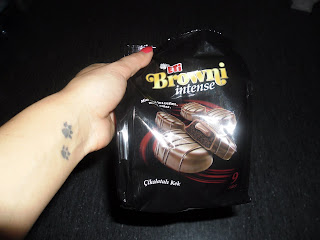 I had a contingency plan, but I did not apply it.  There are some sentences which were told by famous people.  I would have wanted the students to change the sentences into reported speech. 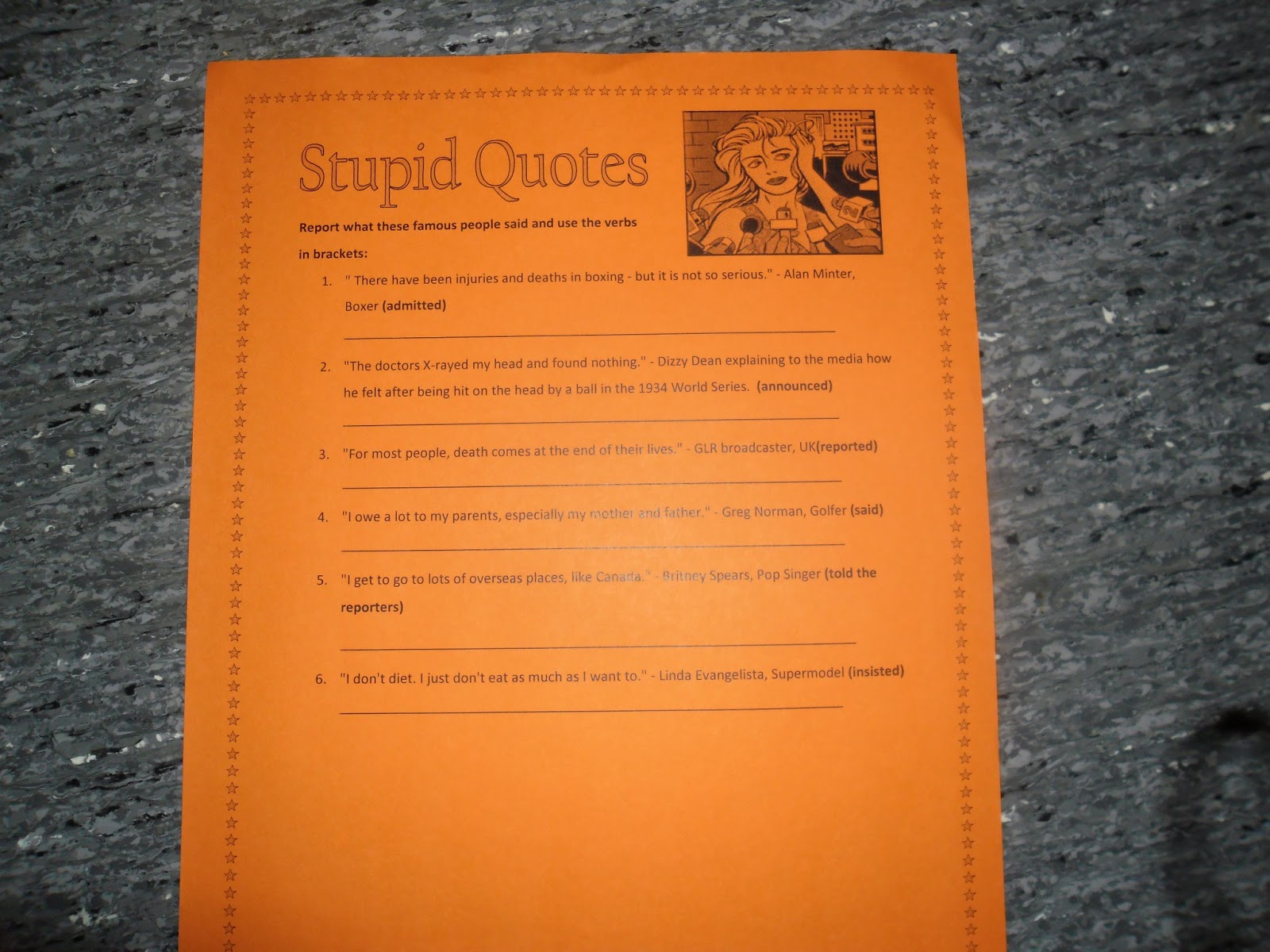